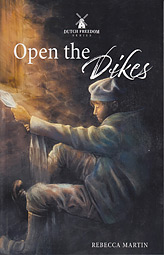 "Memories," Gerrit said with a grimace. "I wish I could just throw my memories into the Scheldt River and watch them float out to the North Sea, never to be seen again."

Gerrit and Bettgen both had happy memories of growing up in Mennonite homes—and sad memories of losing their parents. But they had strayed far from their Mennonite heritage.

Yet the memories persisted, becoming all the more vivid when the Pruys children came into their lives. These children, too, learned what it was like to see their parents being captured by cruel bailiffs.