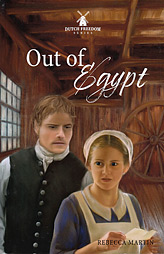 "Recruiters," gasped Pieter when he was near enough. "Just as we sang the closing hymn, recruiters for the king's army came barging in."

Will the young men who were taken be able to resist the drillmaster's pressure? Starvation and other tortures were used to compel them to take up arms. King Frederick William wanted them in his army!

In this fourth book of the "Dutch Freedom" series, we find the persecution easing off. No longer are the believers being slain for their faith.

Yet some are concerned. As the church transitions out of persecution, what will happen to the purity of the faith?

Laurens and Margi, in the Netherlands, struggle with such questions. So do Janski and Frani, in East Prussia. They still face oppression in different forms. Time after time the Mennonites are forced to pull up their roots and emigrate.

When will they find a land of true freedom?

Or is true freedom a state of heart?

Part One: The Days of Prince William

Part Two: The Days of the Prussian Kings