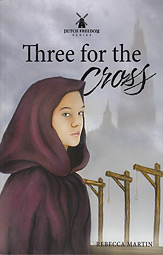 "I don't see why you insist on baptism. You were baptized long ago," she pouted.

His reply was gentle. "That was not true baptism. Now, I am prepared to confess my faith in Jesus Christ and receive baptism as a symbol of dying with Him—taking up His cross and living a new life in His power."

Thus spoke Jacob Dirks to his very unhappy wife, Anneken, who definitely did not want her husband to become a "heretic."

Besides Anneken, who resisted the cross of Christ, you will meet in this story two sisters called Adriana and Mariken. The lives of these three women were bound up with three Dirks men—Jacob and his sons.

The Netherlands in the 1560s were in great turmoil. Caught fast under the iron rule of Spain, the Dutch were subjected to the "Council of Blood." So they called the tribunal of the Spanish Duke of Alba, who sought to rid the land of heretics. Protestants and Catholics fought each other for the upper and and for freedom.

In the midst of this turmoil were some lowly followers of Jesus Christ. They recognized that the cross was the only way to freedom—the true freedom of the spirit.