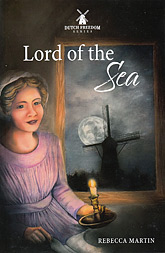 Grandpa Ens—or Opa, as they called him in Dutch—had in his past some things of which he was ashamed. Nothing embarrassed him more than to recall how he had become entangled with those religious fanatics of the 1530s.

Embarrassing or not, Opa knew he had to tell the story. The oncoming generation was encountering similar challenges. There were still leaders who wanted to claim people's hearts and loyalty. As long as he lived, Opa never stopped reminding the younger generation that there is only one Lord upon whom we can truly depend.

For the Dutch-speaking Mennonites of the 1570s, life was not easy. Not for Margi Ens and her family; not for Laurens van Groff and his family. Through rough waters and high waves, they continually drew strength from the Lord of the sea.