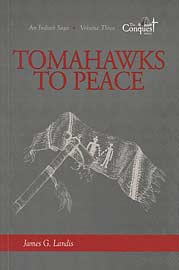 Volume 3 of The Conquest Series; sequel to Homeland in My Heart.

In this book you will feel the terror of nineteen-year-old missionary apprentice John Heckewelder in the Ohioland. Left alone on the Muskingum River by his mentor, Christian Frederick Post, young Heckewelder suffers hunger and sickness.

Famished and weak, "Turtle" Heckewelder is taken captive by Big Indian, a savage Delaware. In a complete reeducation campaign, Big Indian shatters all the pet myths of the Whites that Turtle had been taught. He tells Turtle impassioned stories about George Fox, William Penn, Thomas Penn, Conrad Weiser, George Croghan, Pisquetomen, Canasetego, Nutimus, Teedyuscung, and Israel Pemberton. It was all so different from the "history" Turtle had heard during his Eastern Pennsylvania upbringing.

Struggle with Turtle in his isolated and lonely condition to decide if the tales Big Indian tells are the truth or only fabricated stories to make the Indians look good and the Whites appear as villainous thieves.

If Big Indian's tales are true, will the rising anger Turtle senses in Big Indian lead to yet another war in the Ohioland? Find the answer to this terrifying question in Tomahawks to Peace.