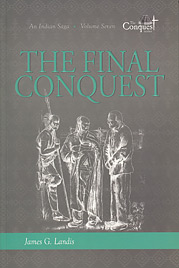 Volume 7 of The Conquest Series; sequel to Black Clouds Over the Ohioland.

In The Final Conquest, the Revolutionary War rages through the Ohioland, further testing the faith of the believers in three Christian Indian villages along the Muskingum River. Threatened with death and destruction on every side, the believing Indians and their beloved teachers cannot determine who are their real friends or enemies.

Despite numerous death threats and a number of attacks, the white teachers loyally stand by their flocks and trust in God to watch over them. Yet they fear the British Indians and look to the Americans for protection. While professing neutrality in the conflict, John Heckewelder and David Zeisberger seek to "save lives" by secretly sending letters to the American military, warning of coming attacks by the British Indians.

On the other hand, the believing Indians fear the Americans with their broken treaties, wanton murders, and threats of "visits." Furthermore, they understand the natural Indian desire for peace and a secure homeland. The believing Indians trust their own tribal nations and agree with why the Wyandot Half King "stopped up" the road to Fort Pitt and ordered that the letters should no longer go.

In The Final Conquest, you will learn the answer to which side in the conflict one could trust and the difference between being a practical pacifist or a nonresistant believer. And you will discover the true meaning of the gold medallion and its promise to Isaac Glikkikan of a permanent homeland for his people.