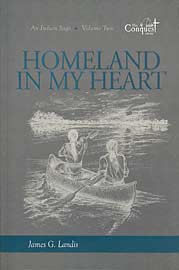 Homeland in My Heart (Volume 2) - "The Conquest Series"

Volume 2 of The Conquest Series; sequel to Lenape Homeland.

This book challenges many of the basic tenants of the Whites—land ownership, kingship, war—by telling the Indian side of the story.

In this second volume of The Conquest Series, Owechela, a master Lenape orator prepares his grandson, Glikkikan, for the annual festival where he is to tell the story of his illustrious grandfather, Sage Meas.

Meas strains to comprehend the meaning of life as he meets up with settlers, traders, pirates, governors, Mennonites, soldiers, slaves, traitors, and his own native people. He often launches scathing attacks on the religious pretenses of the Whites and mounts a defense of Lenape worship and culture.

Enjoy Sage Meas's subtle mockery of the white man's claims in the parables of Tired Moon Pond. Learn with Meas the difference between pirates and privateers. Think about the hazards of cross-cultural love affair. And imagine what would have happened if the Indians had counterattacked a commander of the Royal Navy.

It's all in Homeland in My Heart.

Volume Two: Homeland in My Heart