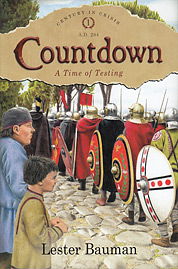 Countdown: A Time of Testing (Book 1) - "Century in Crisis Series"

Book 1 of the Century in Crisis Series.

Mark had heard stories about persecution in the past, but it didn't seem real. All he had ever known was peace, and in his youthful innocence he did not realize how quickly things could change.

In AD 284, Diocletian was crowned emperor of Rome. Almost two decades later, soon after Mark was ordained a presbyter, the emperor unleashed his fury on the church. It was a time of suffering and testing—the worst persecution Christianity had ever faced. Mark and his wife were caught right in the middle.

They had a choice. They could give up their faith and live. Maybe even prosper.

Or they could stand firm. And die...

Part I: A New Emperor

Part III: Can Emperors Be Gods?