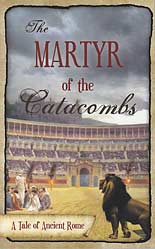 The Martyr of the Catacombs

"Be thou faithful unto death, and I will give thee a crown of life."

From the folds of his military mantle, Lucullus drew a scroll of parchment and handed it to Marcellus, who eagerly examined its contents. He was being appointed to a higher grade and commissioned to search out and arrest Christians in their hiding places, particularly in the Catacombs.

Marcellus read it with a clouded brow, and laid it down.

"You do not seem very glad," Lucullus said.

"I confess the task is unpleasant. I am a soldier, and do not like to hunt out old men and weak children for the executioner; yet as a soldier I must obey."

In the massive Coliseum filled with the roar of bloodthirsty crowds, a young Roman soldier was introduced to Christianity. It was the beginning of a personal spiritual pilgrimage. His quest led him to the Catacombs, a vast underground system of silent, dark corridors and rooms outside ancient Rome. The Catacombs served as a hiding place for the hated and hunted Christians and a burial place for the martyrs. it was here that Marcellus met the holy people called Christians and learned the Truth that changed them. Would it change him?

The Martyrs of the Catacombs is a spellbinding and inspiring account of intense persecution and victory through Jesus Christ.