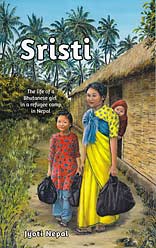 Ruth pulled Sristi aside and handed her something wrapped in plastic. "Sristi, I will probably never meet you again. But I want to give you a gift. Even if you don't read it now, keep it with you. Later when you grow up, you can read it."

Sristi's home was a bamboo hut in a refugee camp in Nepal. She went to school in the camp, played games with her friends, and traipsed around after her lively little brother. Every morning Sristi's mother offered incense to a Hindu goddess and rang a special worship bell.

One day Sristi opened the Bible Ruth had given her. There, in the very first sentence, she found a special surprise. Sristi and her mother began learning about the God of the Bible. Was this God truly better than their Hindu gods and goddesses?