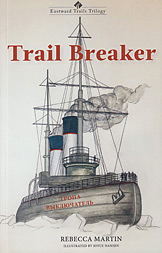 "Maybe they'll hound us right off the continent into the ocean!" Sixteen-year-old Abram Wiems and his people are suffering terrible hardships under Lenin, Russia's new Communist ruler. The long arm of the secret police reaches right into Abram's family, tearing it apart.

"Shouldn't we be doing something to fight back?" the Mennonite young people ask. When German guns are made available, many of the young men do fight back. They take up arms in self-defense.

As Abram struggles with bitterness because of what his father has to endure, he begins to think that self-defense might be the answer. How else could the Mennonite way of life be preserved?

In Trail Breaker, Abram finally learns that Jesus has a better way—the way of peace. In fact, Jesus is the way. Beginning in the turbulent final months of the First World War, this story takes place more than 300 years after Eva's Milk Pail, the second book of the Eastward Trails Trilogy.