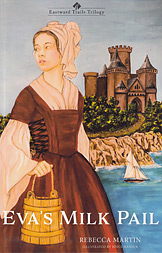 The old wooden bucket had drawn water from many of Europe's rivers: the Rhine, the Inn, the Danube, the Vistula. Belongings had hastily been stuffed into the bucket as its owners were forced to flee from one country to the next. Time and again, Eva's milk pail was used for baptism. In 16th-century Europe, baptism was a dangerous activity!

In this second book of the Eastward Trails Trilogy, you will first meet Greta, daughter of the Bettje whom you met in Reclaimed. Soon the Dutch brethren on the Vistula are joined by other refugees—Germans from central Europe. Among them is Eva, lugging her old wooden bucket.

What is so special about an old milk pail? The rest of the story tells about the travels of that bucket as the brethren flee again and again from persecution, finally ending up on the Vistula.

Customers who viewed this product bought