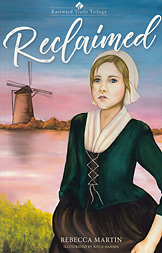 To fifteen-year-old Bettje Weaver of Leeuwarden, reclaiming land from the sea was a concept she well understood. Near Leeuwarden were wide, green polders that had once lain beneath the North Sea. Bettje knew the importance of strong dikes to keep the sea from pouring back over the land. Fear strikes her heart when a storm arises and the dikes begin to leak.

But leaking dikes are not the only danger threatening the Netherlands. It is 1535, and a group of people called "Anabaptists" cause upheavals everywhere. So great is the "threat" that the emperor Charles decrees all Anabaptists must be executed.

Then Bettje's own parents become baptized. To the teenager it seems her world is falling apart. But Father and Mother have a different view. They say they have been reclaimed!

Read how the Weavers and others flee from the Netherlands, braving the Baltic Sea to seek refuge in Poland.

This story is an attempt at recreating the earliest history of the people who today are often called "Russian" or "Mexican" Mennonites.