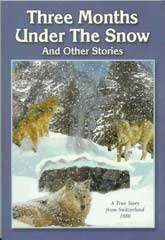 Three Months Under the Snow - and Other Stories

Three months under the snow?! Is this some fictitious tale of a North Pole expedition? Or if it is true, how did anyone live to tell the story?

Translated from the 19th century French, Three Months Under the Snow is a school boy's own diary of his captivity with his grandfather in a Jural Mount chalet.

Your heart will throb with Louis as he tells of their narrow escape from fire, their fear of his father's wellbeing, rationing their lamplight, a terrible hurricane, wolves, Grandfather's last hours, the heart-rending burial, and the final rescue from the snow-covered prison.

Learn of God's providence as time and again He proves Himself sovereign and as Grandfather interprets it to his grandson.

Recommended reading for every teenager!

Three Months Under the Snow

The Babes in the Basket