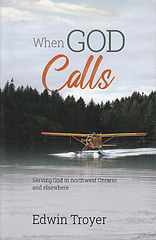 Sometimes God calls us to unexpected places. When Edwin and Edna Troyer were called to mission work in northwestern Ontario, they had misgivings. Slate Falls seemed too remote, too isolated. The only way to communicate with the outside world was with a community telephone, and the only way out was by floatplane, the way they had come in.

As the Troyer family settled into their new home and met their neighbors, they soon felt more at home. They realized there was much work to do—and it would not be easy. Not only were the people ignorant of God, many were also slaves to strong drink and other vices.

Despite the challenges they faced, Edwin and Edna knew God had sent them there for a reason: to share the Gospel. Their job was to plant the seed and then trust God to do the rest. And He did. One by one, people began repenting of their sins and coming to the Lord.

This book is a call to faithfulness—to be willing to answer God's call and follow wherever He leads.

Part One: Trip to Brazil