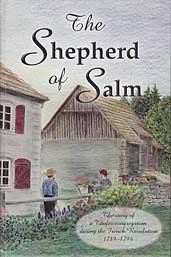 The Shepherd of Salm

"What's going on here?" a voice thundered. "I wish you Täufer would get out of here!"

Christian Gerber jumped. Who? What? Why would anyone be so angry?...

He tried to remember. Something about that voice seems familiar—that German with a heavy French accent. Who can he be?

To Christian, Paris seemed far away that summer afternoon in Salm, and he did not guess how the uprisings the stranger described would affect the the next years of his life or disrupt the home he hoped to share with Anna Küpferschmitt or call him to the greatest privilege God grants His children—the opportunity to lay down life to gain Life. Yet, Christian had placed his faith in the Shepherd, and he was ready to follow.

The Shepherd of Salm is a carefully researched and fully documented story of real people in real places. Some of this material has been gleaned from resources that were freshly translated into English specifically for this project.