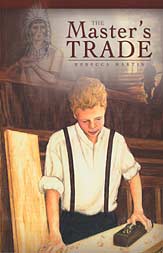 With high hopes John Rittenhouses' parents join the surge of Mennonites into the American frontier. The Master Craftsman carves out young John's faith and character in this budding wilderness where medical help is scarce and hard work, danger, and Indians are plentiful.

Will John's sister Meg ever walk without pain? Should they stay on the homestead with warring Indians pouring over the mountains? John worries about his wild red-haired uncle Dan when he joins the army against Grandpa's wishes. Then Dan is captured by the Indians. Will he ever return? If he does, how will he look and act after living with the Indians so long? But most importantly, will he repent of his wicked ways and give his heart to Jesus Christ before Grandpa dies?