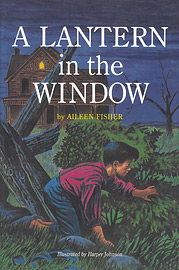 A Lantern in the Window

Nothing exciting could happen on a farm on the Ohio River, Peter thought. He wanted to be near the river to get a job on a river boat. What were the mysterious sounds in the night, skiffs on the river, strange people asking questions, the lantern in the attic in the night? All Peter was told, at first, was to read the Preamble of the Constitution. Peter found his gentle Quaker relatives were part of the Underground Railroad and when he helped the big slave, Jethro, he learned the importance of what the man kept risking his life for—"Liberty... or death." A very exciting period in history. Peter became a hero.