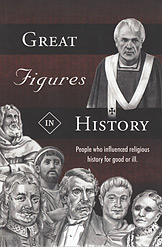 People who influenced religious history for good or ill.

History need not be dry. This books gives the reader a very accessible snapshot of the lives of more than thirty key figures in religious history.

In addition to well-known people in history, some of whom we list in this book, there have been millions more who worked behind the scenes as helpers. Famous authors needed un-famous editors and printers. Famous evangelists needed people who invited friends to the meetings. Famous Bible translators needed wives and sons and daughters who would help them, sometimes by knowing when to leave them alone.

In God's sight, the unknown individuals are just as great as those who are better known. God bless them all. And, unknown readers, God bless you all.