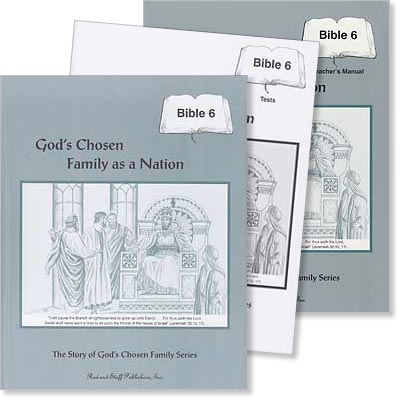 published by Rod and Staff Publishers (1999)

This study covers Old Testament history from King Saul to the end of the Old Testament. As the pupil studies the Israelite kings, prophets, and the nations' responses to God's messengers, they see the importance of right choices and the awful results of rejecting truth. They follow the Israelite nation, both the Northern and Southern Kingdoms, to captivity because of their sin. They return with a remnant of Jews to rebuild the nation of Judah in the face of opposition from surrounding enemies.

The Bible is the pupil's textbook. The workbook guides the pupil through the study of the Bible as he looks up verses and answers the questions. A variety of questions types include multiple choice and filling in the blanks. There are also vocabulary studies and other educational exercises on such subjects as music in Bible times, the ten "lost" tribes of Israel, the doctors in Bible times. Five lessons focus on Life in Bible Times: "What Did People Wear?" "The Israelite Family," "Israel's neighbors," "Food and Mealtime Customs," and "Making a Living." Each of these lessons also includes a section on using Bible study books.

The teacher's manual, bound with a durable cover, has a reduced copy of the pupil's workbook with the answers filled in. Oral reviews, main points, suggested memory passages, and other notes to the reader are in the margins.

Chapter One: Israel Becomes a Kingdom

Chapter Two: The Northern Tribes Set Up a Separate Kingdom

Chapter Six: The Jews After the Captivity