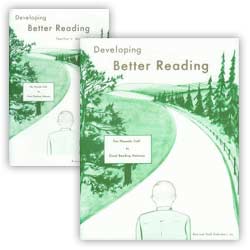 Developing Better Reading is a concentrated phonics course of 30 lessons. Students who missed phonics instruction in the first two grades would benefit from this study taken slowly through the year. Poor readers in the upper grades or adult level could also benefit.

Included in this course are lists of words that are to be used as oral reading tests, thus permitting a teacher to check each pupil's progress.

Definitions and rules of pronunciation, spelling, and syllabication are simply and clearly stated and distributed throughout the book to provide for a systematic and logical learning process.

The teacher's manual includes answers and detailed instructions for class procedures, review, and testing mastery of the material. Use of the phonics flash cards (from the Bible Nurture and Reader Series) is woven into this course.