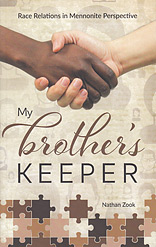 As Christians, we believe all humans are one extended family descended from Adam and Eve. Yet we may have difficulty seeing a family resemblance or feeling a blood kinship with people from other nationalities, ethnicities, or races. Differences, real and perceived, can lead to fear and mistrust. Being part of the human family doesn't guarantee loving relationships—even the first family was plagued by hatred and violence.

My Brother's Keeper discusses the history of race relations, looks at how Mennonites have responded to racial diversity in the past, and suggests Biblical responses to issues such as interracial marriage, transracial adoptions, race-based privilege, and political correctness.

Our homes and churches can be a foreshadowing of the fellowship of Heaven, where the Bible describes a multiethnic multitude praising God together.