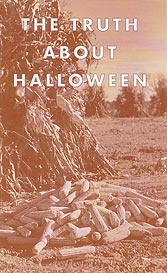 Tract - The Truth About Halloween [Pack of 100]

published by Rod and Staff Publishers

On Halloween, many parents encourage their children to pay respect to the devil and evil spirits. Thousands of people willfully sanction the homage of Satan, decorating their homes and church buildings with trappings from Lucifer's kingdom in violation of God's Word. Preposterous? Read on.

The first observance of October 31 as a holiday began well before Christ's birth. This day marked the end of the Celtic calendar year. It thereby was the eve of Samhain, a three-day festival of the dead, celebrated by the Celtic pagan cult called the Druids. During this festival, the following activities were said to have occurred: the dead rose and wandered; divination and soothsaying were practiced; fairies, witches, and goblins harassed the people of the countryside; Druids demanded contributions of food to support their special diet.

The observance of Samhain continued, and in A.D. 837 Pope Gregory IV instituted All Saints' Day and All Hallows' Even, or Halloween, as a Christian holiday, which the church hoped would eliminate or replace Samhain and its pagan practices. It did not. During the Middle Ages, such practices accompanied a surge in witchcraft and actual worship of Lucifer himself. One of the special "Sabbaths" for this worship was October 31, and witches were said to travel to these services on broomsticks, accompanied by black cats.

In light of this brief historical review, consider some of the current practices and activities associated with Halloween.

1. October 31 is obviously linked with a pagan holiday during which divination and soothsaying were practiced.

2. Masks and costumes are used to conceal the true identity of children, who are then urged to go out and mimic the acts of trickery and harassment previously attributed to fairies, witches, and goblins.

3. The simple trick-or-treat is a demand for food contributions, which is clearly connected with the Druids' demand for their diet.

4. Posters of witches on broomsticks across the moon actually depict them as on their way to a special "Sabbath" service for the worship of Lucifer.

5. Pumpkins carved to show a face are related to the turnips carved into death masks, which were carried by Druids during Samhain.

The Christian is to concentrate on pure and heavenly things, for the fruit of God's Spirit is "love, joy, peace, longsuffering, gentleness, goodness, faith, meekness, temperance" (Galatians 5:22,23). But what is heavenly about witches, fortune telling, magic, screams, threats (trick-or-treat), disfiguring property, skeletons, hideous masks, spooks, haunted houses, coffins, owls (omens of bad luck and death), graveyards, pirates, monsters, demons, and the like? Really, Halloween's emphasis is associated with the underworld of hell.

"But we only do it in fun and make-believe," you may object. But God knows what you do not know—that you can't get involved in satanic practices without certain danger of being deceived by the devil. God says, "There shall not be found among you any one that... useth divination [fortune telling], or an observer of times [one who uses horoscopes and such like], or an enchanter [one who casts spells or hypnotic trances], or a witch, or a charmer, or a consulter with familiar spirits [one who works through spiritistic mediums], or a wizard [warlock], or a necromancer [one who speaks with the dead]. FOR ALL THAT DO THESE THINGS ARE AN ABOMINATION UNTO THE LORD" (Deuteronomy 18:10-12).

The former queen of witches of Europe, remarked to a Christian audience in Louisville that she and other witches and satanists would laugh when they saw Christians participating in and celebrating Halloween, even though they did it unknowingly. Can we afford to popularize this "holiday" while our land is dark with the blood of violence and is groaning under the results of ignorance and sin?

Be prepared for Satan's attack when you repent of your respect for this base holiday of death. Satan has enjoyed your support, and he will not give it up easily. Family and friends will oppose you, and even your church may speak evil of you. Persevere, and trust the Lord, because He is faithful to direct your paths. When children come to your door on October 31, sing them a verse of "Jesus Loves Me"; give them a small New Testament or a copy of this tract and a brief, kind testimony of why you want to give God glory on this day.

"For ye were sometimes darkness, but now are ye light in the Lord: walk as children of light: (for the fruit of the Spirit is in all goodness and righteousness and truth;) proving what is acceptable unto the Lord. And have no fellowship with the unfruitful works of darkness, but rather reprove them. For it is a shame even to speak of those things which are done of them in secret" (Ephesians 5:8-12).

"Blessed are they that do his commandments, that they may have right to the tree of life, and may enter in through the gates into the city. For without are dogs, and sorcerers, and whoremongers, and murderers, and idolaters, and whosoever loveth and maketh a lie" (Revelation 22:14,15).