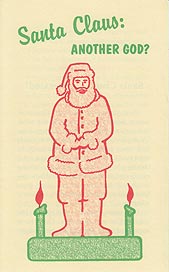 by Richard Hollerman published by Rod and Staff Publishers

Through the so-called Christmas season, Santa Clause is much in the mind of American children. Books portray him, TV displays him, songs remind us of him, and the stores even give the opportunity to meet him! Just how Santa will climb down the chimney, how he will keep from becoming overheated in Texas weather, and how his sleight will function without snow pose little problem to the admirers.

How many parents who profess to worship God and serve Jesus Christ have acquiesced to the Santa Clause myth simply because the world around us exalts him! Is the Santa fable really innocent fun? Should it be accepted in our families and promoted by Christian fathers and mothers this time of the year? Does the Bible have anything to say about this contemporary emphasis on a mythological Santa?

The Santa Claus myth is a cruel fabrication--a fanciful, destructive lie perpetuated by parents who hypocritically tell their children not to lie! Are we justified in lying simply because a child enjoys the lie? Are we exempt from guilt simply because lying is accepted by a major part of society? Is the Santa myth simply a good white lie of no consequence? "Lying lip are abomination to the Lord" (Proverbs 12:22). We read that God hates "a lying tongue" (6:16,17). Paul tells us to lay aside "lying" and to "speak...truth" (Ephesians 4:25). God assures us that "all liars" will have their part in the lake of fire (Revelation 21:8). This should settle the matter for all of those who prize honesty and truthfulness.

Furthermore, Santa Claus, or Saint Nicholas, is not simply an overweight, white bearded, jolly old man dressed in a red suit, who lives at the North Pole. To many, Santa is elevated to the level of Deity. In effect, he has become a god. Notice the characteristics of God attributed to this supernatural figure:

In these and other ways, the mythical Santa Claus has become something of a god, since he has superhuman attributes. This constitutes an affront to the true and living God. "The Lord is great, and greatly to be praised: he is to be feared above all gods. For all the gods of the nations are idols: but the Lord made the heavens" (Psalm 96:4,5) Some tell us that if parents tell their children to believe in both Santa Claus and Jesus Christ, and then later reveal the mythical character of Santa, the children will also have their belief in Christ undermined. How sad to think of parents' willingness to deceive their children and weaken their children's faith simply for the sake of "fun" and a little excitement.

Nothing eternal is to be gained in believing a lie except eventual disillusionment. Nothing is more precious than truth. Christians will remember the virtue of honesty through all seasons of the year. Let us love, trust, and serve the "living and true God" (Thessalonians 1:19) rather than giving our allegiance to a fictitious Santa Claus!