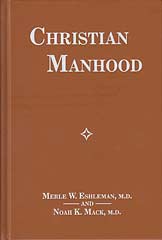 Eastern Mennonite Publications is reprinting Christian Manhood upon permission from the original publisher. This again makes available for our people today what was considered by many as a good book on an important subject. We feel this will be helpful to parents who wish to give their growing boys sound information on physical development.

Evil forces directed by Satan are busy exploiting young men as they go through the stages of development. Wrong and unwholesome information or a lack of pure information (Titus 1:15) has often caused serious problems for young men in their teen years. Sometimes those problems remain a handicap as they mature into adulthood.

Christian Manhood is reprinted with very little change from its original form as printed in 1948. The following items have been deleted: several words on page 61; two diagrams, one on page 2 and one on page 82; and the appendix. The board does not necessarily endorse every detail of this book, but we feel it is a fair and helpful treatment of a rather delicate subject.

We feel this book should not be placed in school or home libraries, nor should it be given to a young man for his personal library. It is rather a book to be kept by the parents to give to their sons to read at an early stage of their development and again in the midteen years. They should not have free access to the book to feed on this type of material.

Due to the influence of a corrupt society, the inclinations of fallen human nature, and the over-promotion of sex education in our time, even a book like this should be used with much discretion.

As a church group we warn our people against the sex exploitation that is so prevalent in the world. We are exposed to its influence through printed material in stores, in public rest rooms, by society's attitudes toward morals, and by the public undress.

May God help us shield our children from these ravages as much as possible. May we continue to promote personal holiness and also give a group testimony against the immoral conduct that is so often taken for granted by professing Christians.

In order for our church group to survive and be a people separated unto God in holiness, the rising generation of our church must be living in victory in personal purity of life and thought.

—Publication Board of the Eastern Pennsylvania Mennonite Church