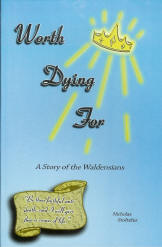 Worth Dying For: A Story of the Waldensians

A lone soldier came riding to the door of Perry's cabin. He summoned Perry outside, and gravely read the edict which had been passed.

Be it hereby known that every member of that false sect known as the Waldensian is commanded to appear before the burgomaster at ____, within three days of the reading of this edict; and shall there solemnly swear under oath that he will from henceforth and for the remainder of his life, regularly attend holy Mass, and will do all within his power to have his children also in attendance.

Any person who obstinately refuses to take this oath of allegiance to the holy mother church, be it known that his property, goods, and chattels will immediately be confiscated, and he and his house will be put to the sword, as is a fit death for all such heretics.

"Did you understand what I read?" asked the soldier.

"Yes," spoke Perry with bowed head, "I understood it."

At first the Waldensian could scarcely believe what they had heard. Surely, there must be a mistake. The only course left to them would be to flee to the mountains. This, in the dead of winter, would be tragedy.