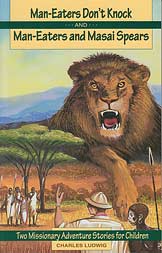 In Man-Eaters Don't Knock you meet Missionary Green and his two native boys, Ndama and Ochella. They learn about Simba (that's the man-eater) and go to the village to help trap him. Everything they try fails, until one dark night when the man-eater grabs Chemel! Then, things happen and the whole tribe turns to the message of the white man's Savior.

Man-Eaters and Masai Spears—This time Missionary Green and his boys go into the Masai tribe, famous for the spears. Almost before they get there, they are tricked by two husky warriors who bring the three before Mbya, wily, tricky witch doctor. He almost feeds the boys to the vultures, hyenas and Simba, before Ndama becomes hero of the hunt. Mbya's influence disappears and the gospel message prevails.