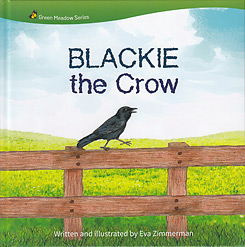 From the Green Meadow Series.

Blackie the Crow was wet and cold. In the dark night, a storm had blown in over the green meadows and Blackie had fallen to the ground below. He could not get back into his nest to Mother and Father Crow.

As Blackie grew, he got into all kinds of mischief. He teased the dog, he teased the cat—and he even teased visitors!

But Blackie was just being a crow, the way God had made him.