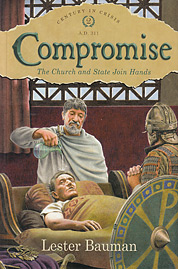 Book 2 of the Century in Crisis Series.

Times had changed. The persecution ordered by Emperor Diocletian was finally over, and everyone breathed a sigh of relief. The new emperor not only tolerated Christianity but actually seemed to favor it. What was going on? Would it last?

It was A.D. 311, eight years since Mark's wife had been martyred for her faith. Life had gone on, but Mark was increasingly lonely. He wondered what God had in store for him. He also wondered what the future held for the church. Would Christians hold fast to the teachings of Christos, or would the new freedom lead to internal disputes and compromise?

Constantine, the new emperor, had his own problems. Ruling the empire was a constant challenge—and so was dealing with his own family. Why was his wife acting so strange? And why had his son left home for no reason?

Part I: A New Day Dawns for Rome

Part III: Behind the Scenes in Nicomedia