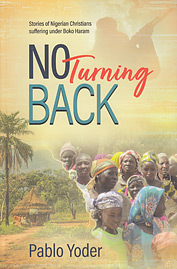 CLEARANCE - No Turning Back

Gambo was just ready to reply when a sound brought them to a sudden halt. Motorcycles! Within seconds, the roar increased as the motorcycles came rapidly down the trail toward them. There was no time to react. As the cycles came into view, the young men's hearts froze. Boko Haram! The thought struck all three of them with frightening reality. Boko Haram soldiers often drove around on motorcycles doing their pillaging, but they usually hit at night, not in the morning.

The swarm of seven overloaded motorcycles quickly came to a stop, creating a cloud of dust as they surrounded the three young men. Each motorcycle carried two or three soldiers dressed in fatigues. All toted AK-47 assault rifles and had long knives at their waists.

"Hands up!" the leader of the group barked, "And no tricks, you pack of infidels. You are going with us."

For Christians in Nigeria, persecution is not just something that happened in the past. It is happening today—and is terrifying real. As Boko Haram terrorists make their raids, Christians often face an awful choice: renounce Christ or die.

The stories in this book are gripping, heartrending, and at times shocking. We wonder how people can be so cruel. But more than that, we see the faithfulness of God and the truth of Jesus' words, "Neither shall any man pluck them out of my hand."