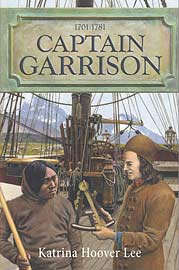 Based on the life of Captain Nicholas Garrison

Desperate and daring, Nicholas seeks a compass for his soul.

Young Nicholas blinked back tears and set his jaw as he watched the full moon rising. He would prove he could be trusted. He would forget the past. As soon as he was old enough, he would leave and go to sea. He loved the sea.

Nicholas' parents had taught him right from wrong. But the bitterness of loss, the anger at cruel treatment, and the lure of a sailor's loose life led him further and further from God.

After years of braving storms and pirates on the high seas, Nicholas became desperately ill. Then he remembered his Moravian friend, Brother Josef. He remembered the verses his mother helped him learn as a boy. His wicked life stared him in the face.

God had seen every sin he had ever committed. Nicholas was not smart enough to escape nor good enough to go to heaven. His attempts at right living had fallen to the ground, and he had nowhere to hide himself from God. He deserved to die.

"Father God! Give me one more chance!"