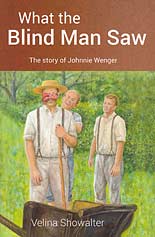 What the Blind Man Saw

The story of Johnnie Wenger

"I've been thinking," began Johnnie as he tied the knots to hold the thread in place on the broom he was making.

"I don't doubt that," interrupted Papa dryly. "I can't keep up with your ideas. What am I to expect next?"

John S. Wenger made his home in the fertile farmland of Lancaster County, Pennsylvania, during the late 1800s and early 1900s. Born blind in one eye, he lost sight in the other at the age of twenty-two. It was a hard blow, but Johnnie was not one to give up.

Blind Johnnie learned to make brooms and assemble farm equipment, especially binders. He liked new inventions and understood machinery. He was a big help to the farmers in his neighborhood.

Blind Johnnie also helped with the Mennonite mission on Welsh Mountain. In his older years, he was delighted to learn to read the Bible with his own fingers. Determined, cheerful, and content with what God planned for his life—that was blind Johnnie Wenger.