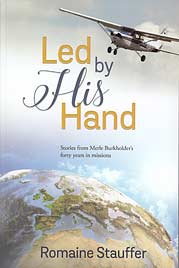 Led by His Hand

The world is so big, Merle thought, but space is much, much bigger. God is in heaven, somewhere beyond all that space. He looks down on the world, and He can see me, a young boy here in the silo.

The thought was staggering. The great and mighty God who controlled the universe saw and cared about him. Merle could not refuse the call of such a great and loving God. I don't know what you want to do with my life or where you want me to go, he prayed, but I am willing to do whatever you ask.

Merle's call to missions came as a boy growing up on a small Pennsylvania farm. Later, his dream of establishing a business nearly silenced that call.

But God's hand continued to lead Merle and his wife Edith. They ministered to souls in snowy northwestern Ontario and under the tropical sun in Haiti. God also led Merle to help begin and administer savings groups among the needy around the world, enabling them to also open their hands and give.

These stories portray the real life of a missionary—a mixture of success, failure, and everyday living—told with a touch of humor. Be inspired, and consider God's call on your own life as you read.