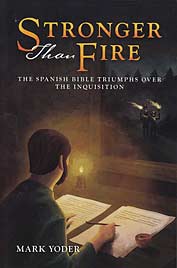 The Spanish Bible Triumphs Over the Inquisition

Few people realize that while the Reformation was altering the face of central Europe, a parallel movement was underway in Spain. It was inspired by brave people who dared to study and practice the Bible in the face of intense opposition from the Catholic Inquisition.

Among the leaders of the Spanish Reformation was Casiodoro de Reina, a man who passionately wanted to provide the people of Spain with the Bible in their own language. During the twelve years he spent translating the Bible, the Inquisition ruthlessly hunted him in an effort to destroy his work. As Casiodoro fled from country to country across Europe in search of safety, the Inquisition imprisoned, tortured, and burned his fellow believers, determined to suppress the spread of God's Word.

Despite all their efforts, Casiodoro completed his translation at last, and it became the foundation for the Bible that is still read by millions of Spanish-speaking believers today. The gripping story of Casiodoro de Reina's mission is one of adventure, betrayal, suffering, endurance, and death. Most of all it is a story of triumph—the triumph of God's Word that is stronger than fire.