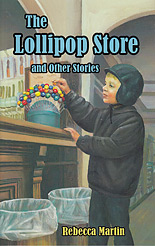 The Lollipop Store - and Other Stories

Jon knew what would happen next. After Father had paid for everything, the lady behind the counter would look at Jon and say, "Now, young man! Do you need a lollipop today?"

She would hold out those lollipops to Jon and say, "Pick your color. And do you have some brothers and sisters at home? Take enough for them too."

Suddenly Jon thought of something. What if the lady forgot to give him a lollipop? That would be terrible.

Read The Lollipop Store and Other Stories to learn how Jon decided to handle this problem.

From the lollipop store to Rufus the kingly cat, these twelve stories about the escapades of four-year-old Jon and his sister Lucy will provide hours of enjoyment for children—and plenty of life lessons.