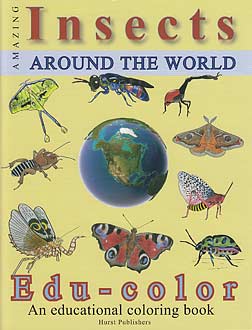 What is so fascinating about insects? First of all, they show the amazing creativity of God, our Creator. Scientists have identified around one million species of insects. But they estimate that there may be a few million more to discover and identify! The Amazon region of South America and the Congo region of Africa are just full of these unidentified critters.

Second, consider the immense variety of instincts in insects. Take, for example, just bees and wasps—so many types of nests that they build, and so many different foods that they eat. How do they know what kind of nests their species should build? Do they ever get mixed up and try to build one like their neighbor's? No, of course not. God gave them the natural ability to build the nest just like they are supposed to.

As you color these pictures, I hope you are amazed and thrilled with the greatness of God.