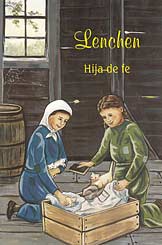 By noon Dilek's stomach craved for something to fill the empty hurt....Lifting the ragged blanket in which she had wrapped Linny, she chewed on the end of the stick that served as her doll.

At least I can pretend I have something to eat," she decided. Then she walked to the water pail to fill up with water.

Grandma had to go to the canals more often now, for they all drank more water in an effort to lesson the emptiness that gnawed within. They also went to bed early, for in sleep the body did not realize its suffering....The evening shadows were lengthening and Dilek's hunger became urgent. Yet she dared not ask Mama for food, for there was none.

Dilek is the true account of a family fleeing Communist persecution in the days after the Communists took over Russia. The Reimer family struggled through hunger, separations, deaths, torture, and despair to find freedom. More than freedom, they finally found the knowledge of God and salvation through His son, Jesus Christ. Their only child, Dilek, showed them the way to spiritual freedom through her undaunted courage and faith.