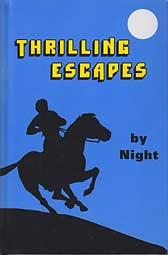 "It is safe, Margaret. No one can come in," said Herman, wondering at her fearfulness and agitation.

They sat before the fire, but Margaret would only sit where she could see the door. When she told the story of the man on the stairs, the faces of her listeners blanched, for penalties of heresy were many and fearful.

"They talk in that manner of that godly man who is under our roof!" exclaimed the elder woman in tremulous tones. "Herman, do you realize Master Tyndale's danger?"

"I do, Mother, but we must contrive to save him," Herman answered, wiping his face, which had gone damp with the horror of these possibilities. "That man, Cochlaeus, must not find him!"

Your own faith will be encouraged and challenged as you follow William Tyndale and his helpers through dark underground passages, robbers' castles, dense wood, and open countrysides, with bullets singing through the air as they flee their pursuers. You will be encouraged by their firm faith in God and His wonderful protection.

This book portrays the great risks Tyndale encountered in his untiring efforts to see the Bible printed in the language of the common people—English. It can truly be said of him that he loved not his life "unto the death."