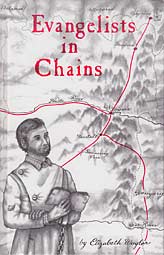 Nineteen-year-old Peter suddenly finds himself in the middle of intense excitement and adventure that tax to the limit his physical and spiritual resources. As an untimely death stares him in the face, should he speak the few simple words that will bring deliverance?

In the days and weeks that follow, Peter swings from depths of despair to plateaus of commitment, while the tensions of his circumstances mount, and the climax, though dreaded, is prolonged for days and weeks. Hunger, unnerving interrogations, sickness, and death become daily, lurking companions that wear away resistance, undermining faith, hope, and soul rest.

A book for teenagers and adults that will inspire courage, dedication, and a devout resolve to endure hardness for the Lord's sake, even if that decision brings death.