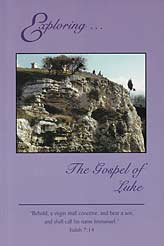 Exploring... The Gospel of Luke

From the "Exploring..." Bible Study Series.

Luke did not intend for his Gospel to be "the most beautiful book ever written," as some have called it. But the Gospel he wrote is a rather unique book.

Luke emphasized Christ's human characteristics. He was the only Gospel writer to describe in detail the circumstances surrounding the conception and birth of Christ. He was also the only one to give us some details about the boyhood of Jesus.

Jesus was,in today's terms, "a people person," and people reacted strongly to Him. A little man climbed a tree to see Him. A woman washed His feet with her tears. Two disciples poured out their grief to Him, thinking He was dead.

And Jesus reacted strongly to people. His way of saying, "Martha, Martha" and "Simon, Simon" is an example of His concern for others. He paused during His triumphal procession into Jerusalem to weep over the city. He agonized in Gethsemane until His sweat was "as it were great drops of blood."

His depth of compassion for people came out in the stories He told. A shepherd lifted a lost sheep onto his shoulders, rejoicing. A father rushed to meet his long-lost son with open arms. A publican cried from his heart, "God be merciful to me a sinner" and went down to his house justified.

Studying the book of Luke gives us a new perspective of who Jesus was—and still is. Just as "Jesus himself drew near, and went with them" long ago, He draws near and goes with His people today.