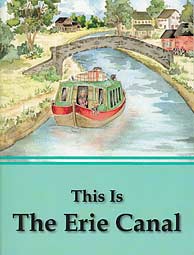 This Is the Erie Canal

Many years ago, settlers began to spread west across America. With horses and wagons, they found their way through the trees and over the mountains.

De Witt Clinton thought of a plan. Why not build a canal across New York State? Some people laughed and called it "Clinton's Ditch." But De Witt Clinton did not give up.