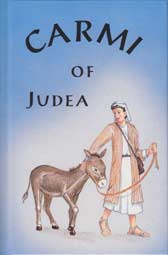 Black-eyed, twelve-year-old Carmi knew his father planned to hire him out to some merchant in Hebron. Surely, surely not to Tiras, the potter to whom his father showed so much kindness.

With a good deal of apprehension, Carmi dragged his feet through the dusty streets toward Tiras's shop....

"What do you want?" Tiras rasped after a hawklike glance at Carmi....

Carmi backed toward the door. "I'm never, never going to work here!" he determined. "This place is like a lion's den!"

Carmi, a lad of Palestine at the time just prior to the birth of Christ, lived with his devout Jewish parents, older sister Reba, and his little brother Abiah.

Carmi's cousin, Benoni, was his best friend. The two spent time together whenever possible. Typical boys, the two found excitement in the two-day travel by foot to Jerusalem for the various feasts at the temple, and when the camel caravans of Arab merchants came trading their goods.

Carmi of Judea presents valuable insights into Jewish home life and worship just prior to the events recorded in the New Testament.

For junior-age and above.