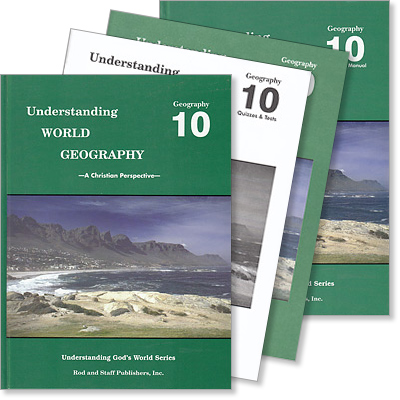 This course discusses God's home for man from a Biblical perspective. The hardcover textbook is divided into nine units, each with 2 to 4 chapters, for a total of 27 chapters. The first two units consider general themes about the physical earth and man's life on it. The other seven units each cover a major region of the earth. Each chapter has review exercises.

Understanding World Geography has a Quick Facts chart for 198 countries, plus the 50 states and the 13 provinces or territories of Canada. It has a pronunciation guide, a glossary, a map and chart index, and a general index. Each chapter begins with a Biblical focus, which includes a short Bible passage and a few pertinent thoughts.

The hardcover Teacher's Manual contains a reduced copy of each pupil's page, as well as copies of the maps, quizzes, and tests with the answers filled in. Surrounding the pupil's pages are the main points, the Christian perspectives, the answers to exercises, and other helpful information.

A separate Map Booklet contains 26 maps for students to label as they learn about different parts of the earth. (Other map work is included in the textbook.)

A separate Quiz and Test Booklet contains a quiz for every chapter, a test for every one or two chapters, and a final test (a total of 17 tests).

Unit 1. The Earth—God's Home for Man