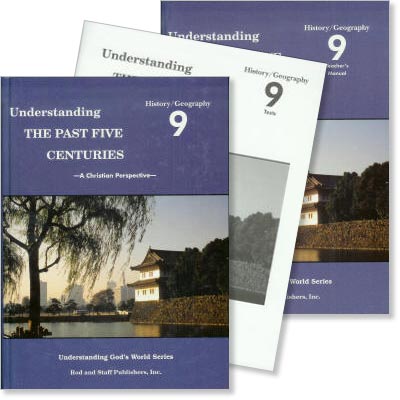 published by Rod and Staff Publishers (2007)

This course covers the last five centuries of world history from a Biblical perspective. Students will learn about different types of governments and about the effects of economics and trade. Influential worldly religions, philosophies, and economic systems are explained.

The text is divided into 28 chapters with study exercises, chapter reviews, and some map work. Many pictures, maps, and illustrations—some in color and some in black and white—are scattered throughout the book.

The teacher's manual contains a reduced copy of each pupil's page, as well as copies of the tests with the answers filled in. Surrounding the pupil's pages are the answer key, main points, Christian perspectives, and other helpful information.

A separate test booklet contains tests to follow every two chapters, and a final test.