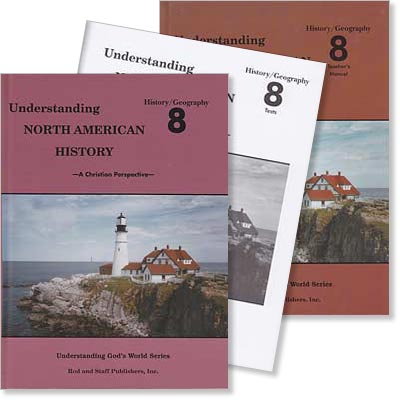 This course tells how Europeans discovered, explored, and settled North America; describes the people who lived here when Europeans came; and explains how economic and cultural changes took place. In addition to United States history, this course includes an overview of Canadian history and of United States and Canadian geography.

The historical events selected for coverage are those that have had the greatest impact on America. Though wars and military actions are covered, they are not overemphasized. Some cultural trends are explained.

Students will also learn how God's people fared amid the changing scenes. They will see that although man accomplishes many things, God overrules to bring about His purposes.

The hardcover textbook has 28 chapters divided into 7 units. The first unit covers the geography of North America, and the other units each cover a segment of United States or Canadian history. Each chapter contains three sections that are each followed by exercises that check the students' understanding of the material. A chapter review follows each chapter, and often includes work with outline maps that are found in the pupil's book. Many color and well as black-and-white pictures and illustrations are scattered throughout the book.

The hardcover teacher's manual includes teaching helps, main concepts, Christian perspectives, and answer keys. For every chapter, suggestions are given for further research, which can be used as the basis for oral or written reports. In addition, there is a quiz on each chapter, which may be given as an oral or a written exercise.

A separate test booklet contains tests to follow every one or two chapters (20 tests total).

Chapter 1. Geography of the United States and Canada

Chapter 18. The Development of Canada

Chapter 23. The United States and World War I