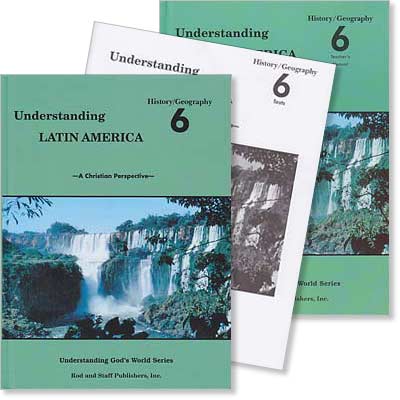 This textbook covers the geography and history of the Latin American countries from a Biblical viewpoint. There are 12 chapters, each with 2 or 3 parts, plus review lessons.

Geographical and political features of the countries are emphasized in the first eight chapters. Climates, population, exports, and other statistical information are discussed and map skills are taught.

The last four chapters begin with a study of the ancient Indian empires, and cover Spanish exploration and conquest of the New World and move on to modern times. Glimpses of contemporary Mennonite missions in Latin America remind us of God's plan in spreading the Gospel to all mankind.

Many color and black-and-white maps, illustrations, and photographs are used. Study exercises are included. The book also has blank maps that may be traced or copied for map exercises.

*Chapters 5 and 6 are an exception to the usual pattern of one part per week. The three parts of each of these chapters may be done in two weeks.